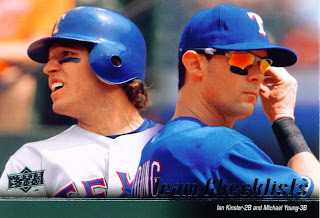 They made it! Finally! 49 seasons after the founding of the franchise the Rangers have won a postseason series. They did it the hard way too, three on the road. First time in MLB history that a postseason series has seen the visiting team win every game.

Ok, so Cliff Lee is definitely the hero of last night's game. In fact, he might have paid for himself with his performance last night alone. Elvis Andrus and Vlad Guerrero were key components as well with their great base-running. Ian Kinsler's two run smash in the ninth inning helped convince the Devil Rays that they were done.

Decided to post this team checklist today from the 2010 Upper Deck set instead of an individual card. That's because in spite of the awesome pitching performance from Lee and exciting plays by several position players, advancing to the ALCS was a team accomplishment in the end. The whole team had to show up. Several players have struggled at the plate but on the field and in the clubhouse all seem to be contributing. Case in point: Last night the players started off their celebration with Ginger Ale so that Josh Hamilton and C.J. Wilson could take part. That's classy. That's one of the reasons I like this team.

Congratulations on winning guys. So very glad to see it happen. You all played hard and deserve to enjoy the victory. Just don't forget to get ready to do battle with The Evil Empire. The Yanks will be in town on Friday. I for one am pulling for a fireworks welcome.