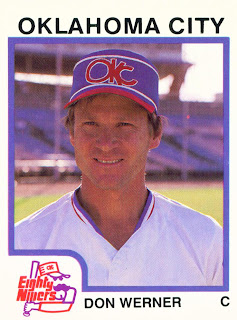 Quick return to the regular posting schedule as we wait for the World Series to kick off in a couple of days.

Today we see Don Werner on card number 137 of the 1987 ProCards set. By the time Don appeared on this card his Major League playing days were long past. He last suited up for MLB action in 1982. Not one to quit though, Don would hang around in the minors until 1988. Even then he wasn't done. While managing in Rookie ball in 1997 Don would put himself in a game as a pitcher. That would finally be the end of his playing career.

In 1987 Werner would play in 54 games for the Oklahoma City Eighty-Niners. He would post a .204 batting average in 158 plate appearances. Not too bad for a backup catcher.

One reason I wanted to post Don's card today is because he was a catcher. Not that I mind discussing Don's career but I did want to talk for a minute about another catcher, Ivan Rodriguez. As you may know from previous posts, I am a Pudge fan. In fact, he is one of the very few players that I was willing to buy or trade for cards of even when he wasn't in a Rangers uniform. I say was because I have decided to break up the I-Rod collection. For some time I haven't been interested in picking up his cards and I finally realized that I no longer follow his career. What I like about him is who he was when he was with Texas. There's just no point in continuing the player collection. The Rangers cards will be added to the Rangers collection and I will trade or sell off most of the remainder.