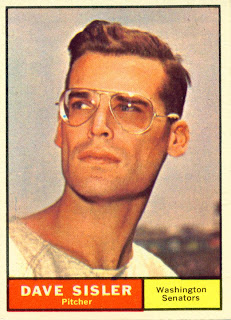 So yesterday was a travel game in the ALDS. This evening the Rangers host the Devil Rays in Arlington. Since this post is pre-scheduled and was written before the series even started I have no idea how it is going as I writing this. Hopefully Texas managed at least one win in Tampa Bay.

Looking at card number 239 in the 1961 Topps set. Dave Sisler appears here and is hatless as usual for the Senators from this year. In answer to the question that I also asked, Dave is Hall of Famer George Sisler's son. Washington had drafted Dave from the Tigers in the 1960 expansion draft.

Sisler would appear in 45 games for the Senators in 1961 and would function as the club's first closer. He saved 11 of the 29 games he finished. Dave wasn't an imposing closer though, his ERA was a bloated 4.18 and he lost eight games. He was just the best the Senators could do under the circumstances.

1961 would be Dave Sisler's only season in a Senators' uniform. In November of that year the team sent him to Cincinnati along with some cash for Claude Osteen.
Posted by Spiff at 12:01 PM