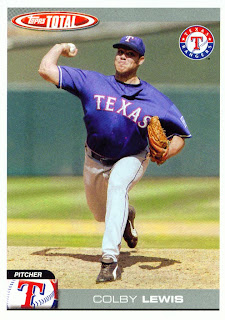 Colby Lewis, shown here on card number 83 of the 2004 Topps Total set, pitched the Rangers back into the World Series tonight. It was great to see him go 7.2 innings while giving up just two runs.

Also nice to see Darren O'Day and Neftali Feliz come in for the final 1.1 innings and shut the Giants down. I was beginning to think that the bullpen was shot. Fine job guys.

Also nice to see the bats start to wake up. Not sure the slump is completely over but there is definitely light at the end of the tunnel. Special kudos to Mitch Moreland for his home run. Ironic that he and Josh Hamilton were the only two left-handed batters in the lineup and were the two to go deep. That is a very good sign.

Ok guys, go out there tomorrow and make Tommy Hunter a winner and it's a whole new Series. Go Rangers! It's time.
Posted by Spiff at 9:43 PM

A Yankee-killer AND a Giant-killer?

Colby Lewis is my new hero.