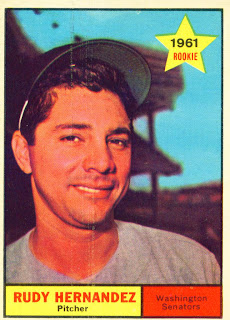 So with the Rangers' loss last night I decided to once again hit the Senators up for blog material.

Today we see Rudy Hernandez on card number 229 of the 1961 Topps set. Rudy kind of looks like he is enjoying an inside joke.

I suppose in a way he is. Rudy appeared in 1960 for the Washington Senators. That team then moved to Minnesota following the 1960 season. In December of 1960 the new Senators drafted Rudy from the old Senators (Twins) in the expansion draft.

In 1961 Hernandez would appear in just 7 games for Washington. All of those appearances were in relief. Rudy would toss a total of only 9 innings. He would face 37 batters. Of those 37 he would strike out 4 and walk 3. His final ERA was 3.00 and his WHIP was 1.22.

Rudy also pitched in 42 games in the minor leagues in 1961 and that is where he would spend the rest of his career. Following the 1964 season he would hang up the spikes for good without ever seeing the Big Leagues again.
Posted by Spiff at 7:50 PM

Hal Woodeshick also stayed in Washington after the 1960 season.