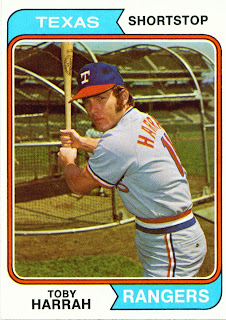 By the time 1974 rolled around Toby Harrah, shown here on card number 511, was a fan favorite in Texas. He lived only a short drive from the stadium and often arrived for games on a motorcycle. Kind of fits with the sideburns he's sporting on this card.

The season started off great for Harrah. During Spring Training his wife gave birth to a boy - Toby. Dad would respond with a great season, especially at the plate. He would also play in every game that season for Texas.

Toby Harrah was a fan favorite before the 1974 season. During the season he became a fan favorite with power in his bat. This was definitely something the team would look to build on in the future.
Posted by Spiff at 12:04 PM