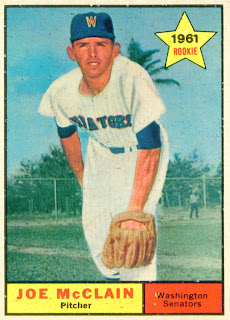 Joe McClain, shown here on card number 488 of the 1961 Topps set, was a minor league pick for Washington in 1960. By that point he had already been in the minors for six years. Interestingly, his first year of pro ball was in 1953. His second was in 1956.

Joe was already suspect when the Senators grabbed him. He had previously suffered an arm injury. I was unable to find a specific year the injury occurred but I suspect that it may have had something to do with the gap in his early minor league career.

Joe was a control specialist and actually posted a decent 3.86 ERA for the Senators in spite of his dismal 8-18 record. In his 33 appearances he started 29 games. Seven of those games were complete games and two were shutouts. The 212 innings McClain tossed tied him with Bennie Daniels for the most on the team and his 76 strikeouts were second best behind Daniels.

As a rookie on an expansion team Joe had a pretty good rookie season in 1961. He hadn't shown Cy Young level stuff but he did have flashes of brilliance. If he could stay healthy he could compete for a spot in the rotation in 1962. That was a big if. The injury he had suffered in the minors had taken around 5 mph off his pitches. Maintaining his pitch control and keeping the injury from flaring up would be his two big hurdles if he wanted to stay in the Majors.
Posted by Spiff at 4:27 PM