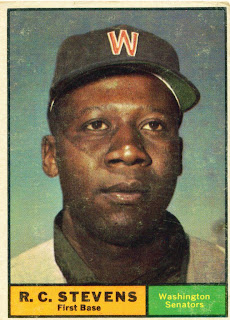 R.C. Stevens appears a little less than thrilled here on card number 526 of the 1961 Topps set. Perhaps he had reason to be.

The Senators acquired R.C. from the Pirates in the same trade that netted them Harry Bright and Bennie Daniels in December of 1960. After Dale Long won the starting first baseman's job, Stevens was relegated to a backup role. He even spent part of the season at Triple A.

R.C. was obviously struggling. In 69 plate appearances he managed to hit just .129 with a .217 on-base percentage. If that wasn't rough enough he struck out over twice as often as he walked - 15 as compared to 7 times.

In spite of his bat issues Stevens played in 140.1 innings in the field over 25 games. He started just 14 of those games though. In 167 chances he never made an error for a perfect fielding percentage.

It appeared that R.C.'s defense needed no work but that his bat would be his downfall. (Kind of brings Chris Davis to mind.) After 1961 he never played in the Majors again in spite of two more seasons in the minors.
Posted by Spiff at 6:17 PM