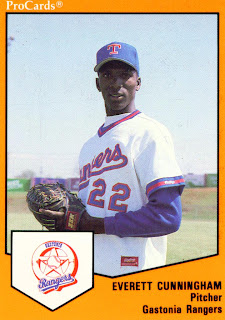 Moving on in the 1989 ProCards Gastonia Rangers set we come to Everett Cunningham on card number 1000. Texas picked Cunningham up in the 4th round of the 1988 draft. He played Rookie League ball that year.

In 1989 Everett would appear in 27 games for Gastonia. He would start 20 of those games and throw a total of 139.1 innings on the season (a team best). Three of his starts went on to be complete games. His season win-loss record was 9-5 (third most wins on the team).

Not a bad season for Everett Cunningham, even for Single A. Such a performance would merit a promotion to A+ ball the following season. If he could keep those numbers rolling he would keep climbing the rungs.
Posted by Spiff at 6:03 PM