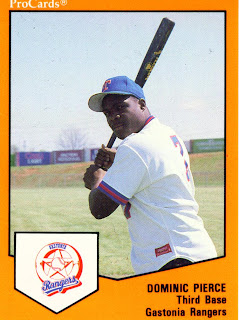 On today's minor league card we see Dominic Pierce on card number 1001 of the 1989 ProCards set. 1989 would be Pierce's second year of pro ball. After being selected by the Rangers in the 7th round of the 1988 draft he played Rookie League ball that season with Butte. He started the 1989 season with the GCL Rangers in Rookie ball but moved up to Single A after 36 games.

After the promotion Dominic would play in 41 games for the Gastonia Rangers. He would post a .258 batting average and a .357 on-base percentage in 114 plate appearances. Both of those numbers were an improvement over his Rookie Level numbers of the same year.

Dominic played the majority of his games at third base but did appear at second in one game. In 47 chances at third he made six errors for a fielding percentage of .872. Pretty ugly but he still had time to improve. After all, he was only 20 years old and just at Single A ball.

Either Pierce didn't see it that way or something else happened. 1989 would be his last season in pro ball. After just two years and at age 20 he was done.
Posted by Spiff at 4:51 PM