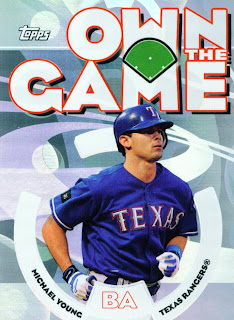 Ok, I'll admit that I just found out about the most recent spat between Michael Young and the Rangers today. I've been mulling it over, reading what I can find, checking out others thoughts, and mulling it over again. I have a few comments of my own that I would like to make. They approach the matter from a couple of angles and might even make some sense.

1. The Rangers do seem to have pushed Michael around in the past. They asked him to move from short to second to come up to the Bigs. Then it was back to short when Soriano wouldn't move. Over to third when Andrus came up. Off to DH and super utility when Beltre was signed. I was concerned at one point that they might push him too far. Seems they might have.

2. The Rangers have the right to move Michael around. They are paying him $48 million over the next three years. I get paid literally a fraction of that and my boss moves my schedule around to best fit the needs of the company. Sometimes he asks, most of the time he tells. Hard to understand where Young is coming from here. See if Jackie Robinson or Yogi Berra have a shoulder to cry on. Gotta make it quick though since they are busy learning new positions.

3. Michael Young says that he doesn't want all of this out in the open. Gonna call it as I see it here and say horse-puckey. If he didn't want it out in the open he shouldn't have talked to the media or anyone else not directly involved. The only reason he did was to try to manipulate the situation. I've personally seen this done by others. Whining to third parties about your issues with your boss is childish and unprofessional. No excuse for it. None.

4. Speaking of unprofessional, what's the deal with the timing? Ten days before pitchers and catchers report? Talk about a bad time to try and make a trade. Throw in that Young has provided a list of teams that don't need him or can't afford him and things get real sticky. Want to be traded? Waive the partial no trade clause and let the team work with all the other teams. If you really want to move, agree to void your contract and play for whatever the new team can afford to pay you.

5. Speaking of trades, the team needs to make sure they get a good deal. No salary pickup, no dump for a third-rate prospect. You can't get a good deal for Mike, sit on him. Literally if you have to. He can always be traded later, even if he changes his mind.

6. Not sure calling Nolan Ryan a liar and manipulator is a very good career move. Should have thought that one over a bit. Might make a good beer commercial though - it's smooth even when you're not...

7. I was afraid that the Beltre signing might have this result. Young said he was fine with the whole deal but it seemed too good to be true. Hope the contract works out well now or Jon Daniels could be in really hot water in a year or two.

8. The whole thing is really sad. I thought Young just might stay with the team for his whole career. In this day and age that's rare and exciting. Unfortunately both sides got swelled heads after last season and got stupid. For the sake of the fans both should have their ears boxed soundly. I do tend to lean towards Michael being more of the problem than the management but things could have been handled better.

Well, that's about it. It's all too bad. I still think that the Rangers are better with Young than without him; if he can rediscover his maturity and professionalism. Young is definitely better off in Texas than anywhere else; a loyal fan base and a shot at another postseason can't be bad. I like Young and the kind of player that he is. I like Jon Daniels and Nolan Ryan and the job they have done. There is always the possibility that cooler heads will prevail and this will all blow over. Just like it did in 1914 when much more important issues were at stake and the world was on the verge of war. Bummer.
Posted by Spiff at 6:50 PM

Awesome post, I enjoyed reading your take on the matter. I especially agree with point #2.

I applaud John Daniels for trying to make the Rangers the best team they can be. No question Beltre is a better 3rd baseman than Young. I would have liked to have seen Young given a chance at first base. None of this would have mattered if they would have been able to keep Cliff Lee.