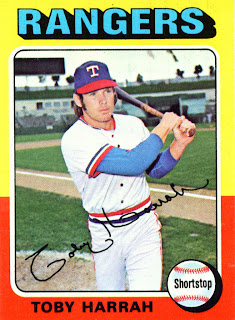 All told Toby would appear in 151 games in 1975. 118 of those games were at shortstop for a total of 986.2 innings. He also played 160.1 innings over 28 games at third base and 166.2 innings over 21 games at second base. Generally Harrah fared better at shortstop and third base than at second. His fielding percentages at short (.963) and third (.971) were both above league average. At second though, his .949 fielding percentage was well below the league average. Clearly it was better to keep Toby on the left side of the infield.

At the plate he improved on his performance the previous year. With 631 plate appearances he managed to raise his batting average (.293) and on-base percentage (.403). He also walked 98 times - almost double the previous season. His new-found power stuck around as well as he knocked 20 home runs and 24 doubles. Surprisingly, his speed actually improved as he stole 23 bases while getting caught only nine times. Toby bumped in 93 RBI while scoring 81 runs himself.

All in all Toby Harrah had a very successful season in 1975. His defense more versatile than the previous season and his offense improved significantly. In fact, he led the team in on-base percentage, stolen bases, walks, and doubles. The season was not unnoticed, Harrah was named to the All-Star team and even received some MVP consideration. It certainly looked like the Rangers had a gem in Toby Harrah.
Posted by Spiff at 5:06 PM