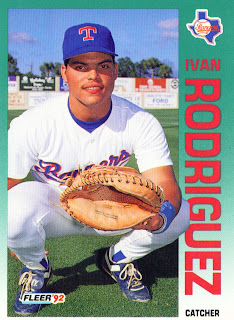 Number 16 on T.R. Sullivan's Top 50 Decisions list is the failure to re-sign Ivan Rodriguez, shown here on card number 316 of the 1992 Fleer set.

By the end of the 2002 season the Rangers were light years away from their postseason appearance in 1999. The losing record combined with the monstrous contract issued to Alex Rodriguez left the team a financial shambles. Pudge was one of the early victims.

Ivan enjoyed playing in Texas and was a huge fan favorite. Many considered him to be about the best player to ever don a Rangers uniform. He had made statements that he wanted to play in Texas until he retired and many fans hoped to see that happen. The problem was that he was up for free agency and the team had no money. The result was that the "washed up" backstop was let go for nothing.

Pudge's departure left a gaping hole for Texas behind the plate. Not since the ill-considered trade of Jim Sundberg had the team been in this spot. After eleven seasons the hunt for a starting catcher was on. It didn't go well as one questionable decision followed another and the parade of stopgaps went on. It started almost immediately as Texas sent a young Travis Hafner to Cleveland for Einar Diaz.

Diaz started for a year and then was replaced by Rod Barajas. Barajas held the job for three years before Gerald Laird took over in 2007. Laird lasted for two seasons and then the platooning started. Saltalamacchia, Teagarden, Treanor, Molina, Ramirez, Torrealba, and Napoli have all called significant numbers of games for Texas in the past three seasons. The quality has varied but none were Pudge.

Mike Napoli might present more than a stopgap solution but that remains to be seen in the future. What can already be clearly seen is that allowing Ivan Rodriguez to walk away in 2002 is still impacting the Rangers almost a decade later.
Posted by Spiff at 4:24 PM