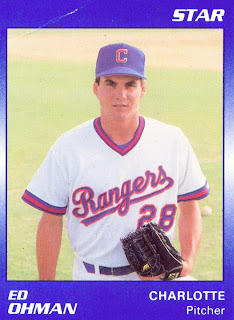 Moving on to the next card in the minor league binder we come to Ed Ohman's 1989 Star card, number 9 in the set. As you can see from the scan, this card has a creased upper left corner. That bums me out but it's the only copy of the card I've been able to come up with so in the binder it stays.

Texas drafted Ohman in the 46th round of the 1988 draft and he played for the GCL Rangers in Rookie ball the same year. In 1989 he would pitch one inning for the Butte Copper Kings in Rookie ball. The rest of the season would be spent in Port Charlotte playing A ball for the Charlotte Rangers.

Ed had showed a lot of promise in Rookie ball as he tallied a 0.99 ERA and a 0.853 WHIP in 36.1 innings pitched with the GCL Rangers. A level ball would prove to be a rougher ride.

For a pitcher to have as much trouble as Ed Ohman had making the transition from Rookie to A ball is not a good situation. The lower the draft pick the less time the team is willing to invest. Ed was not only a low draft pick but he was also a right-handed pitcher. That's not a recipe made for extended chances. I'm not sure if the club or Ed made the decision or the exact reasoning behind it but 1989 was Ed Ohman's last season in professional baseball.
Posted by Spiff at 5:36 PM