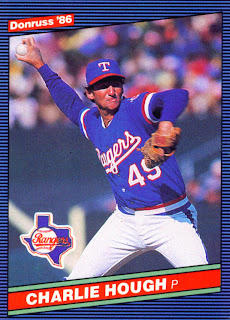 The 1986 Rangers ended up second in the American League West with 87 wins. They show up 12th on T.R. Sullivan's list of Top 50 Odd Moments in franchise history.

On June 16, 1986 the Rangers were scheduled to play a night game in Anaheim against the then California Angels. Charlie Hough, shown here on card number 342 of the 1986 Donruss set, was on the hill for Texas.

In the first inning Hough set the tone for the night as he retired Gary Pettis, Wally Joyner, and Doug DeCinces in order. For the next seven innings the Angels remained baffled by Charlie's knuckleball. Going into the bottom of the ninth inning the score stood at 1-0 in the Rangers favor. More impressive was the fact that the Angels had no hits. Three more outs and Charlie Hough would have a no-hitter!

Starting off the inning, Rupert Jones pinch-hit for Bob Boone only to be called out on strikes. Two outs left. Jack Howell then came to the plate for Gary Pettis and reached on an error by left-fielder George Wright. Ironically Wright had replaced Gary Ward for defensive reasons heading into the bottom of the inning. The error placed Howell at third with Wally Joyner coming to the plate. Joyner singled to ruin the no-hitter and the shutout. Ballgame tied 1-1. With Joyner on first and DeCinces at the plate, catcher Orlando Mercado couldn't handle one of Hough's pitches for the first time that night. Joyner to second. DeCinces then struck out. One more out and the game would go into extras. Hough intentionally walked the still dangerous Reggie Jackson to bring George Hendrick to the plate. The count moved to 3-2. The last pitch was strike three but Mercado again couldn't find the handle. As the runners advanced, Mercado looked to throw home but nobody was at the plate. Charlie Hough had forgotten to cover home!