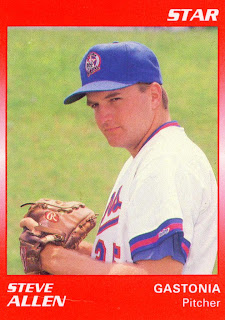 Happy New Year everyone. Hope the past year treated you well and that this one is filled with promise.

Now that the 1989 ProCards team set is past, we move into an area of the minor league binder that has a few random cards. The first one is Steve Allen's 1989 Star card, number 133 in the set.

Star was ProCards main competition in the minor league market in the late 80's and early 90's. As such the two companies ended up issuing cards of a lot of the same players. I have to say that I prefer the read border on this card to the orange ones on the 1989 ProCards set. I have already covered Steve's 1989 season in a previous post but the back of this card has a lot more biographical information than the back of his ProCards card.

Looking at the back of the card we read that Allen graduated from Bishop Guertin High School in Nashua, New Hampshire in 1984. While in high school he played baseball, basketball, and golf. After graduating from high school he attended the University of Massachusetts at Amherst. He was named to the All-New England team in 1987.
Posted by Spiff at 12:01 PM