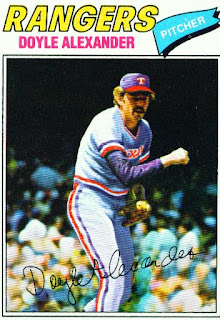 With the Rangers having the day off yesterday I figured it was as good a time as any to get started on the 1977 Topps team set. Doyle Alexander leads off on card number 254.

Alexander's wearing airbrushed duds because he was signed by Texas as a free agent on November 23, 1976. The Rangers expected Alexander to be a solid starter and give the team a lift down the stretch.

Doyle served only as a starter in 1977, making 34 starts and pitching a career high 237 innings. That tied him with Gaylord Perry for starts and put him one inning behind Perry for the team lead. While Alexander's 3.65 ERA and 1.278 WHIP were not team bests, his 17 wins were. This in spite of a career high number of walks.

All in all the Texas Rangers got what they wanted when they signed Doyle Alexander - a solid starter they could run out on a consistent basis. As far as the stretch help, Alexander won four of his last five starts with the Rangers in contention.

In 1977 Doyle Alexander was one of those rare free agent signings that work out as expected. His increased walks were a concern but if he could get them back down to his previous numbers he could be a solid piece of the rotation for several years.
Posted by Spiff at 12:18 PM