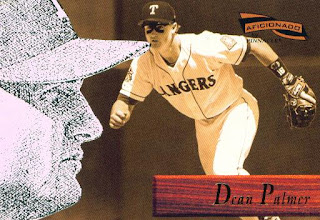 One of the problems with dealing with a recent move is the lack of new cards. I don't have any of the 2013 issues yet. I've seen them in stores but didn't pick any up because I had no place to store them and make sure they didn't get damaged. Everything was in storage.

That said, you will have to settle for Dean Palmer on card number 88 of the 1996 Pinnacle Aficionado set. I like the concept of this set with the player's profile embossed along one side of the card. The placement of the background picture on Palmer's card is not the best though.

Ok, the Rangers won last night. Good. Puts them at 4-1 on this home stand and 6-2 on the season. Considering that's against Anaheim and Tampa Bay as well as Houston I figure things area looking ok so far. Good to see the young guys step up. Rookie Nick Tepesch gave up just one run in 7.1 innings. Not too bad for a guy who wasn't supposed to make the team coming out of Spring Training. Rookie Leonys Martin went 2-for-3 with two runs scored in the number nine spot. Also good to see the old man Lance Berkman working on making believers out of skeptics. I wasn't thrilled when Texas signed Lance but if he keeps up like his 3-for-4 performance last night I'm going to have to say I was wrong.

I want to go on record right here and now and say the Rangers main worry in the American League West is not the Angels of wherever they are this week. It's that no-name Oakland A's team. I said it before Spring Training started but want to get it here in writing. The A's six game winning streak seems to be bearing me out.

Kind of a downer as well. With Nick Tepesch's arrival, the Rangers designated Julio Borbon for assignment. Once the center fielder of the future, Borbon got passed up by Martin and Craig Gentry. Now he's out of options and the Rangers have ten days to trade him or place him on waivers. Borbon's not a bad player and you can bet John Daniels is on the phone trying to swing a deal. Best of luck to Julio wherever he lands. Just not while playing against Texas.
Posted by Spiff at 11:31 AM

Yea, best of luck to Borbon. When he first came up, I thought he was the CF of the future.