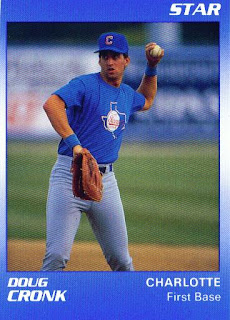 Two losses in the last two days. Not good. At least the Rangers are still in first. The day off today can't hurt and tomorrow they are at home. Time to get on another roll.

Figured this would be as good a time as any to get back to Minor League Monday. Today we have Doug Cronk appearing on card number 5 five of the 1990 Star Charlotte Rangers set.

Texas promoted Doug to Charlotte after he spent the 1989 season at Gastonia. The jump from A to A+ was probably at the same time in spite of, and because of, the high number of strikeouts he had in 1989. He moved up anyway but didn't get to Double A.

Cronk appeared in 106 games and made 390 plate appearances for the Charlotte Rangers. His batting average tumbled 65 points to .186 while his on-base percentage dipped 50 points to .301. He hit just four home runs as compared to 22 in 1989 and struck out 91 times. His fielding percentage remained the same at .989.

Those weren't good numbers for any player trying to make their way up the minor league chain. Especially not for Doug Cronk. 22nd round picks usually don't get a lot of second chances and Cronk didn't get one. 1990 would be his last season in pro ball.
Posted by Spiff at 4:23 PM