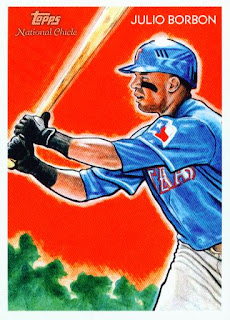 Well, I think I've reached an accord with my computer. At least for the time being. It let me scan card #136 of the 2010 Topps National Chicle set featuring Julio Borbon. Guess we'll see how long the cooperation lasts.

When Topps issued this card Borbon was probably the Rangers top outfield prospect. They were looking at him as the center fielder of the future.With injuries to Julio and Leonys Martin's arrival, that plan didn't work out. Now Jon Daniels is looking to deal Borbon because he's out of options. Word is the Rangers are looking to get pitching and are wanting more than just a roster filler. Makes sense. Borbon is a decent player, young, and has a lot of potential. He just didn't work out in Texas. He could very easily do well elsewhere. Apparently several teams are interested in him. Just what kind of pitching JD can haul in will be interesting to see.

Speaking of pitching, Derek Holland is near the top of my list of early season surprises for the Rangers. After three starts Dutch has tossed 22 innings while compiling a 1.64 ERA and a 0.77 WHIP. The fact that he's walked just four batters helps those numbers immensely. Now to see if he can maintain his performance. Consistency has been Derek's problem from the get-go. If he can figure that out he has ace potential.

The Rangers offense has been consistent for Holland in his three starts this year. Consistently bad. With no run support to speak of Holland is just 1-1. He should be 3-0. Newcomers A.J. Pierzynski and Lance Berkman brought their bats to the regular season as has Ian Kinsler. Nelson Cruz has also put on an offensive appearance. David Murphy, Mitch Moreland, Elvis Andrus, and Adrian Beltre seem to be missing in action at the plate. If anyone finds their bats in your freezer please thaw them out and return them to the team. With the A's on a tear Texas cannot afford to waste any decent outings by the pitching staff.
Posted by Spiff at 11:08 AM

I dread computer problems, so my sympathies.