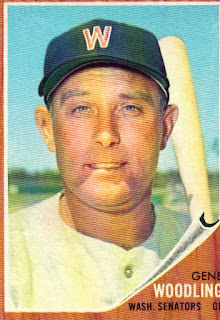 So, the Rangers are on a win streak. I still have no 2013 cards except for a Topps Heritage Neftali Feliz. He's still on the Disabled List though and isn't taking part in the wins.

After fighting with a dying computer I finally got card number 125 of the 1962 Topps set scanned. Sort of. The actual card does not cut off Gene Woodling's name or position.

Coming off a fine season in 1961, Gene was still 39 years old and playing out the twilight of his career. Coming into the 1962 season the Senators revamped their outfield. All three starting outfielders from the 1961 campaign lost their jobs.

Serving in a backup role Gene appeared in just 44 games for Washington and made 135 plate appearances. He would post a .280 batting average and a .421 on-base percentage. The batting average was a drop from the previous season but was still higher than the three regular outfielders. Woodling used his veteran cunning to raise his on-base percentage and lead the team in that category.

Still, with eight total outfielders in the mix, something had to give. Woodling was the oldest and therefore the most expendable. On June 15, 1962 the Senators sold Gene's contract to the New York Mets. On March 8, 1963 his Major League career would close when the Mets released him.
Posted by Spiff at 12:56 PM