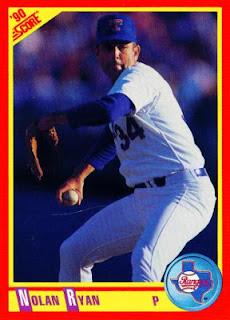 So I saw where Nolan Ryan, pictured here on card number 250 of the 1990 Score set, and George Brett exchanged lineup cards during this weekend's series against Kansas City. The idea was to re-create the original exchange of lineup cards they both took part in at the beginning of their final game. 20 years ago. Hard to believe it's been that long.

It hasn't been twenty years since I last posted but it feels like it might be close. Sorry for the abrupt interruption. Switching shifts at work and trying to keep up on things around the house meant the blog got away from me.

While I was gone things just kept rolling. The Rangers kept winning but so did the A's. Oakland has won 14 of their last 16 and whittled Texas' lead to two games. Not much hope Milwaukee will knock off Oakland today so I am thinking the lead will go to a game and a half. Anaheim is 10.5 games back and still under .500. I said Oakland was the team to watch out for.

Ian Kinsler's stint on the Disabled List got extended due to a stress reaction. Not sure exactly what that is but it is serious enough to keep him from playing for a while longer.

Not that Jurickson Profar minds. He's building his credibility and living up to the hype so far. Smashed a seventh inning home run in yesterday's game to put Texas on top.

Yu Darvish continues the strikeout parade and continues to get no decisions or losses. Right now he's on track for over 300 whiffs on the season.

Adrian Beltre is day to day with hamstring issues. Not good since his hamstrings seem to be his weakest link.

Alexi Ogando is slated to start tomorrow. Hopefully he can come off the DL hot and contribute right away. The pitching staff is needing re-enforcements.

I think that's about all the big news. Hopefully now that I'm caught up I can stay on top of things and keep the posts coming.
Posted by Spiff at 6:41 PM

casino bonus guide
Pretty sure he will have a good read. Thanks for sharing!