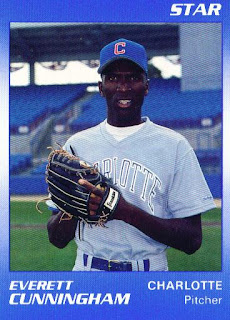 Maybe if I just ignore this homestand it will go away.

Everett Cunningham, shown here on card number 6 of the 1990 Star Charlotte Rangers team set, earned his promotion to A+ ball with his 1989 performance at Single A Gastonia. What he needed to do in 1990 was keep the proverbial ball rolling.

Staring off with the Charlotte Rangers, Cunningham kept things moving right along. He made 11 starts and pitched 75.1 innings. He registered drastic reductions in ERA (2.15) and WHIP (1.035) while compiling a 6-3 record. His strikeout to walk ratio ticked up to 2.04 as he recorded 57 strikeouts and allowed 28 walks.

Those numbers were good enough for a mid-season promotion to Double A Tulsa. Everett would not see the same level of success in his 17 appearances with the Drillers. In 78.2 innings he saw his ERA climb to 4.35 and his WHIP to 1.576.

The 1990 season started off well for Everett Cunningham but ended on a somewhat sour note. He would need to make adjustments quickly in 1991 if he wanted to avoid stalling out at Double A.
Posted by Spiff at 7:02 AM