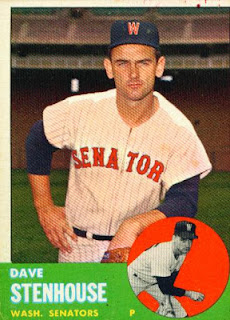 Ok, so I really have nothing positive to say about the Rangers loss of the game and first place yesterday. My mother always said if you can't say something positive don't say anything. I won't then. On to 1963.

Dave Stenhouse shows up on card 263 of the 1963 Topps set. Not sure what is wrong with his uniform in this picture. Maybe he's melting or maybe this is a poor airbrush job. Not sure why any airbrushing would be needed though since Stenhouse was with Washington in 1962.

Dave Stenhouse was coming off a solid 1962 season at the beginning of 1963. He was a mainstay in the Senators' rotation and hoped to remain there. Unfortunately injuries hampered his plan.

Dave appeared in just 16 games for Washington in 1963, all as a starter. After leading the team in complete games the previous season, he finished just two of his starts and tossed only 87 innings all season. That was over a hundred innings less than in 1962. His ERA jumped almost a whole point to 4.55 and his WHIP rose to 1.552. Stenhouse struck out just 47 batters while walking 45. That was an unfavorable move in his strikeout to walk ratio and less than half the K's he notched in 1962.

Clearly Dave Stenhouse was struggling. After a promising year in 1962 he watched 1963 be ruined by injuries. He needed to spend the winter healing up and come back strong in 1964 to stay in the starting rotation for Washington.
Posted by Spiff at 10:18 AM