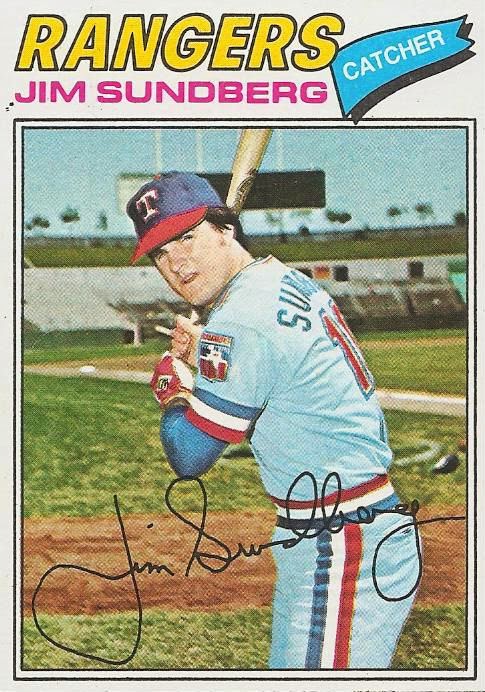 A slightly out of focus Jim Sundberg appears today on card 351 of the 1977 Topps set. In 1977 Sundberg was the Rangers first string catcher.

Jim appeared in 149 games for the Rangers in 1977 and made 533 trips to the plate. Not known for his bat, Sunny was not doing a lot of hitting heading into July. The heat seemed to warm his bat up though and he hit .343 for the rest of the year. That brought his season batting average to .291 and his on-base percentage to .365. He walked 53 times and hit 20 doubles, three triples, and six home runs. That gave him 65 RBI and 61 runs scored of his own.

While turning in an above average season at the plate, Sundberg continued to be average behind it. Average for him that is. Above average for the rest of the catchers in the Majors. Jim put in 1214 innings behind the plate and saw 909 chances. He committed just five errors to end the season with a .994 fielding percentage. That was a full six points higher than the league average. Those numbers came with a range factor that was also above the league average. 43 runners stole on Sunny and lived to tell the tale. He gunned down 55 more would-be thieves though for a 56% caught stealing. The league average was 39%. Of course Jim padded his numbers by picking six runners off first and four off second during the year. Running on Jim Sundberg was risky business.

The Rangers looked to have found their starting catcher for the foreseeable future. If Sundberg could keep his bat working at a reasonable level he was going to continue to nail runners in Arlington for a long time. In seeming confirmation of that, Jim received some MVP consideration and took home his second Gold Glove.
Posted by Spiff at 11:56 AM

That photo was taken in Oakland.