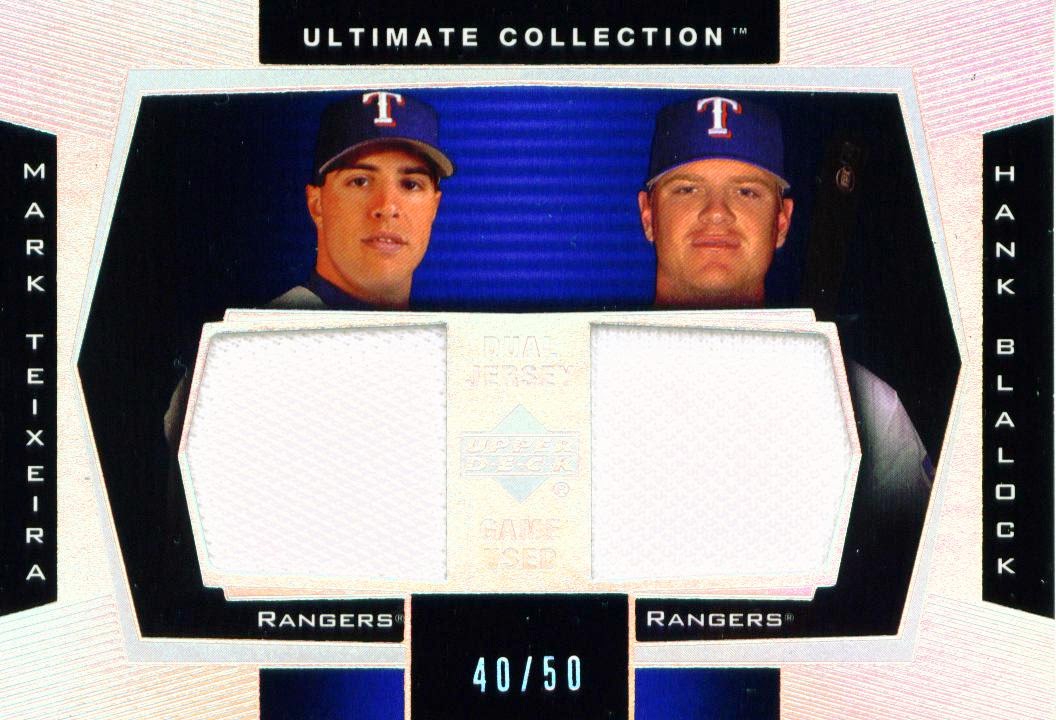 Feeling pretty frustrated by all the injuries the Rangers are facing this year. Looking at this 2003 Upper Deck Ultimate Collection dual game-used jersey card helps a little.

Looking at Hank Blalock I am reminded that an injury, or a series of them, can be career threatening. Hank had his career derailed by repeated injuries. At least most of the players the Rangers are currently missing are expected back.

Former Ranger Mark Teixeira is on the disabled list right now for the Yankees. It's a reminder that the other teams are also struggling with their share of injuries to key players. The Rangers aren't alone in the American League.

The Angels are going to miss Josh Hamilton for 6-8 weeks with thumb surgery. The A's don't have A.J. Griffin, or Craig Gentry. The Blue Jays are doing without J.A. Happ and Jose Reyes. The Orioles are missing Manny Machado. Jeremy Hellickson and Matt Moore aren't pitching for Tampa Bay. Boston is short Will Middlebrooks and Shane Victorino. Detroit is doing without Jose Iglesias. The Yankees are missing Mark Teixeira and I just saw a headline that indicates Jacoby Ellsbury may be following him to the DL.

While the Rangers seem to be among the hardest hit, it does help a little to take a glance around the American League at the other teams losses. I guess misery does love a little company now and then.
Posted by Spiff at 11:26 AM