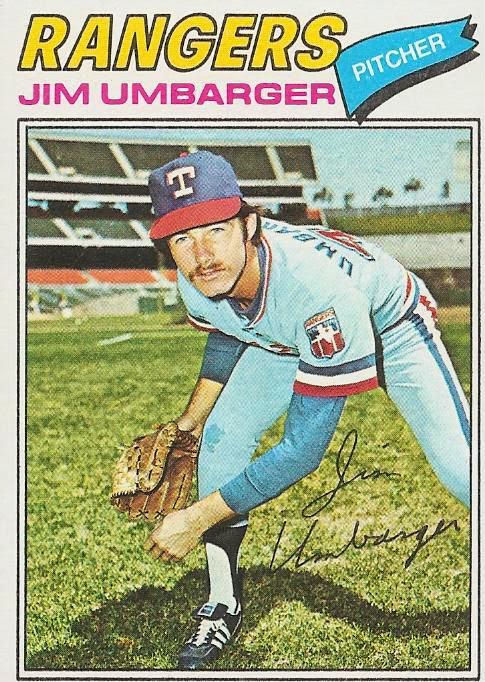 Jim Umbarger's 1977 season was unusual to say the least. Umbarger, shown here on card 378 of the 1977 Topps set, had a decent campaign in 1976 as he moved into the full-time starter role. Coming into Spring Training in 1977 he was determined to build on those numbers.

That 1976 season was enough to garner the Oakland A's attention. They sent Claudell Washington to Texas on March 26, 1977 for Umbarger and the newly acquired Rodney Scott.

With the A's it was back to a swingman role for Jim. He made eight starts in 12 appearances and pitched a total of 44 innings for the Swinging A's. The results were not good. By late August Umbarger was sporting a 6.55 ERA and a 2.045 WHIP.

Perhaps hoping that a return to familiar surroundings would mean a return to his 1976 numbers, Texas purchased Umbarger's contract from Oakland on August 25, 1977. The homecoming was not overly successful. Jim made two starts in three appearances for the Rangers. In 13 innings he posted a 5.54 ERA and a 1.385 WHIP.

While Umbarger's return to Texas did improve his numbers he still had much work to do. Lefties have nine lives but Jim needed to start lowering his ERA and WHIP if he wanted to stay in Texas in 1978.
Posted by Spiff at 10:26 AM