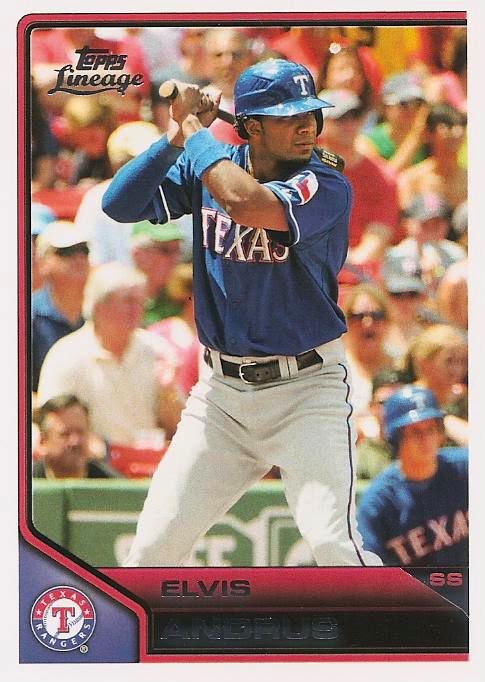 The Rangers lost the series in St. Petersburg two games to one. They would have got swept if they didn't pull out the getaway game yesterday. Joe Saunders got hammered in the first game and is now on the 15-day disabled list. Not sure I am looking forward to him coming back.

I was looking forward to Yu Darvish coming back. He made his first start of the season yesterday and was as advertised. Struck out six in seven innings of scoreless ball. Got his 500th career Major League strikeout in the first inning. He also got the win thanks to Elivs Andrus, shown here on card 12 of the 2011 Topps Lineage set.

Elvis came up to bat in a scoreless game in the top of the eighth inning with Shin-Soo Choo on base. To my (and probably everybody else's) amazement he shot a line drive into the bleachers for a two-run homer. It was the team's second of the season and gets Elvis 25% of the way to his total for last season. He now has 19 in his career. Of all the guys to punch a long ball, Andrus is the last on my possibility list. Glad to see him do it and give Yu the win.

The bullpen took over in the bottom of the eighth and held the Rays scoreless for the final two frames. Texas tacked on an insurance run in the top of the ninth but it wasn't needed. On to Boston tonight where Tanner Scheppers gets his second start of the season. Hopefully he will do better than his first one and lower that 15.75 ERA he's carrying.

Great to see the Rangers take a pitcher's duel. The Rays usually have a pretty good pitching staff and this year seems to be no different. To beat them in a close game like last night is something to be happy about. Darvish pitched in and out of trouble the last couple of innings he was in and probably would have gotten beat if he wasn't on when he needed to be. Hopefully he can iron out any last bugs and be a real workhorse for Texas this year. For now though, I'll take the win and run with it.
Posted by Spiff at 3:01 PM