Walking away with a win. 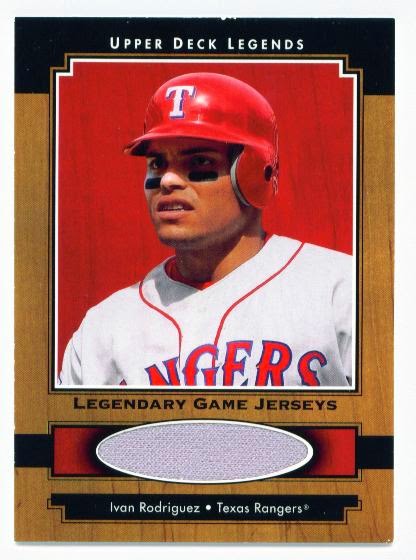 One of the areas I would like to improve in my Rangers collection is having more game-used or autos of current players. With the recent turnover of the roster that's a tall order. Going to have to be something I look into on my next trip to a card shop. Until then I will have to live with posting cards that don't always match the topic, like this 2001 Upper Deck Legends Legendary Jerseys card of Ivan Rodriguez. At least Pudge is still with the team in an instructor role.

I have to admit, the injuries in Spring Training had me dreading the start of the season. Opening day didn't do much to alleviate that feeling. The past two nights have helped though.

Following up on Martin Perez's strong start night before last, Texas got a little shakier start out of Robbie Ross Jr last night. Ross wasn't terrible but he did give up three runs in five innings. That's not great but it is promising for a young pitcher making the move from the bullpen to the rotation. Much better was the second night of scoreless relief by the bullpen.

The Rangers managed scratch one run across in the seventh but entered the bottom of the ninth two runs down. The Phillies brought in closer Jonathan Papelbon and I figured the Rangers were off to a 1-2 start to the season. Instead they managed to score two runs to tie the game up and Shin-Soo Choo headed to the plate with the bases loaded. He worked a walk to push in the winning run. Second straight walk-off win.

Great way to end the game. Who doesn't like walk-offs? They're great so long as they go your way. Just not a good thing to make a habit of. Still encouraging to see the team overcome the injuries and last-minute roster changes to get the season started off well. The team's off tonight and playing the Devil Rays tomorrow. Hopefully they can keep the train rolling.
Posted by Spiff at 11:17 AM