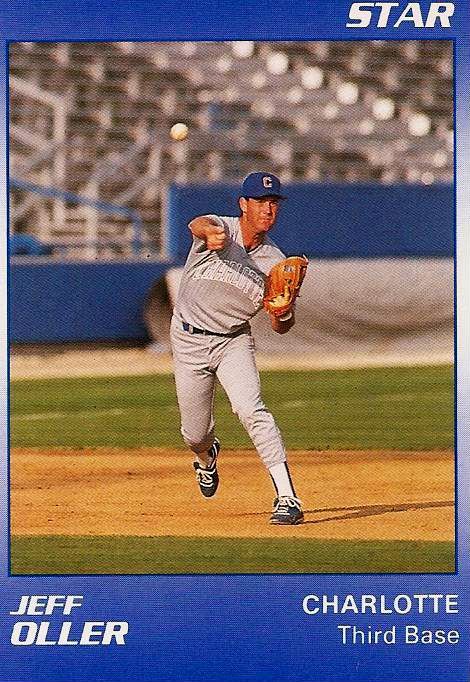 Jeff Oller, shown here on card number 18 of the 1990 Star Charlotte Rangers team set, was originally a third round draft pick in 1985. The Montreal Expos took Jeff out of high school. Drafting guys that young is always a risk and it didn't pay off for Montreal in Oller's case.

By 1990 Jeff was in the Rangers farm system. He had yet to play above Double A and had spent most of his career in A ball.

In the field Oller played only at third base. He played defense in just 50 games. His 16 errors in 108 chances gave him a horrendous .852 fielding percentage.

Clearly things weren't panning out for Jeff Oller. In five years of pro ball he had yet to make it to even the highest level of the minors. Playing in a Big League park remained a distant dream. His power at the plate appeared to be ebbing and his glove was not coming around. Those factors all combined to make the end of the 1990 season the end of Jeff Oller's pro career.
Posted by Spiff at 10:50 AM