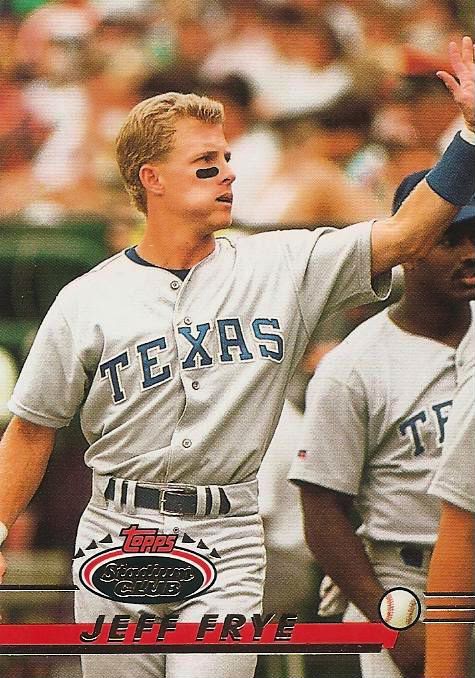 The Rangers had last night off. Probably good with the patched together rotation and lineup they have going right now. Any day off is a day closer to some of the regulars returning. Tonight they kick off a series against the Tampa Bay Rays. Joe Saunders is going to be pitching for his spot in the rotation.

Towards the end of March I posted a list of the team sets I was down to one card to complete. A few days later I received an email from reader Jim. Jim wasn't able to hit any of the holes I listed but he'd taken a look at my wantlists and had a few other cards for me. I wasn't able to come up with anything from Jim's wantlists but he was gracious enough to offer the cards he had as a gift.

A few days ago a small package showed up in the mail. In the package was a group of Senators and Rangers cards. All hit holes on my wantlists. This 1993 Stadium Club #133 of Jeff Frye was one of the cards included. The whole package deserves the high five Frye is handing out. Jim knocked out several Rangers wants and around 13 cards off my Senators wantlists.

It's a rare occurrance to receive Senators cards in trade, even more so as a gift. Thanks a ton Jim, you really made my day with your generosity. Hope I can attempt to repay the favor someday.
Posted by Spiff at 11:21 AM

Happy to help.....all SF Giants fans (like me) still feel like we owe Rangers fans for the results of October 2010..