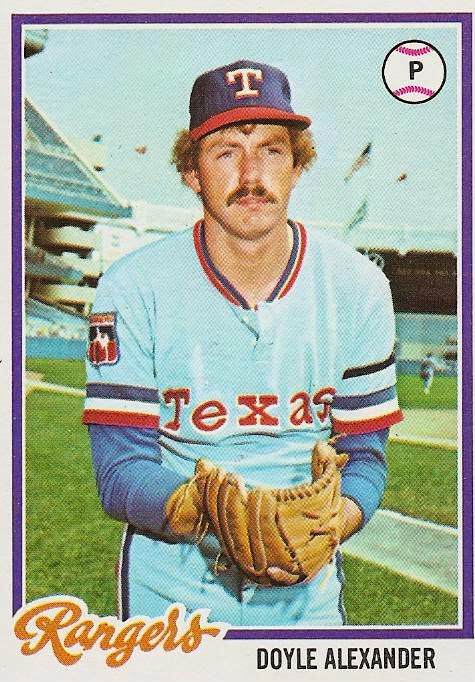 Doyle Alexander appears on card 146 of the 1978 Topps set to kick off the 1978 team set. Before we get to Doyle, I have a quick note I wanted to throw out there.

You can see a mourning band on Alexander's left sleeve. There are several other players in the team set with similar such bands visible. Because most of the photos featured on these cards were taken in 1977, I turned to the 1977 Texas Rangers Media Guide to answer the obvious question.

Turns out the Rangers acquired a player named Danny Thompson on June 1, 1976 from Minnesota in the Bert Blyleven trade. Thompson was apparently an all-around likable guy and quickly became popular with his teammates and the media. Danny lost his battle with Leukemia on December 10, 1976. The 1977 media guide was dedicated to his memory and the team donned mourning bands with Thompson's number 4.

Doyle Alexander was coming into his second season with Texas in 1978 and was working on solidifying his reputation as a strong starter down the stretch. The Rangers were hoping for a repeat of 1977 with a few less walks.

What Texas got from Alexander in 1978 was 31 appearances and 28 starts. That made him the third most used starter. Over the 191 innings he pitched he compiled a 3.86 ERA and a 1.408 WHIP. He struck out 81 opposing batters and issued eleven fewer free passes than the year before. For his trouble he ended the season with a 9-10 record.

Texas was going to be keeping an eye on Doyle Alexander. His totals in ERA, WHIP, and innings pitched all moved the wrong way from the 1977 campaign. He was still a solid starter and consistent stretch competitor but he could stand to improve a little in 1979 if he wanted to move into the top end of the Rangers rotation.
Posted by Spiff at 10:00 AM