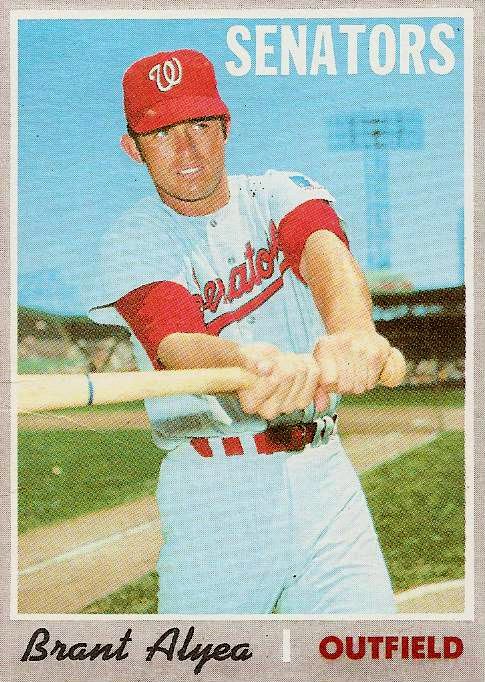 Wow, I'm not sure what happened to this scan of card number 303 in the 1970 Topps set. It looked a lot better in the scan preview and in person than it does here. The corduroy lines aren't on the card. Maybe the computer just doesn't like Brant Alyea.

Whatever the reason you can still see Brant showing off the red uniform of the late stage Washington Senators. He wouldn't be wearing the uniform during the 1970 season however.

Washington dealt Alyea to the Minnesota Twins on March 21, 1970. In return the Senators picked up Joe Grzenda and Charlie Walters. The trade was probably a wash for the Senators. Grzenda had one great season for them before they traded him and Walters never appeared in the Majors after the trade. Meanwhile Alyea had a decent 1970 season for the Twins before watching his numbers drop and being relegated to part-time roles for the rest of his career. He bounced around a bit and was out of the Bigs after the 1972 season.
Posted by Spiff at 12:10 PM