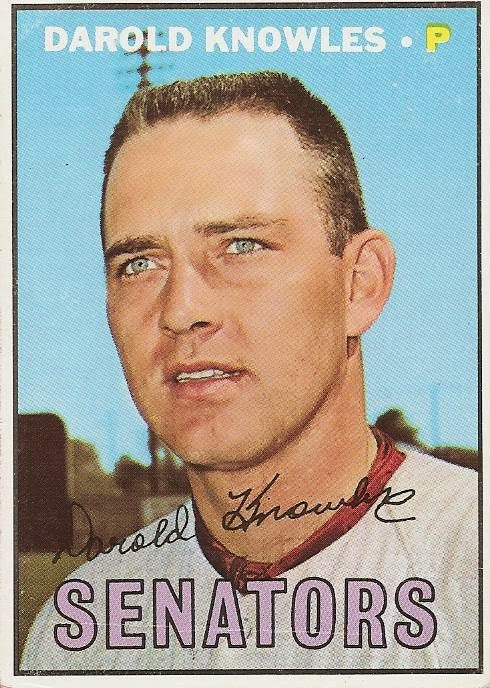 I am guessing that the hatless Darold Knowles is appearing in his Phillies uniform on card number 362 of the 1967 Topps set. Washington got Knowles from the Philadelphia in exchange for Don Lock on November 30, 1966. They were looking for some help in the bullpen and Darold was pretty highly regarded.

The back of Darold's card says he was figuring to become the big man in the Senators bullpen in 1967. He almost did. Knowles appeared in 61 games for Washington in 1967, all but one of them in relief. He tossed a bullpen best 113.1 innings. His 2.70 ERA was a full run behind the best mark in the pen but still good enough for second. His 1.262 WHIP was about average among Washington relievers. Darold also notched 14 saves, most in the pen, as he split closer duties with Dave Baldwin.

All things considered, Darold Knowles had impressed in his first season with the Senators and made the Don Lock trade look like the right move. As long as Knowles could keep it up he shouldn't have any difficulty keeping his spot in the bullpen in 1968.
Posted by Spiff at 11:11 AM

Terrible trade for the Phillies! Lock did nothing, and was gone by early 1969. Meanwhile, Knowles pitched until 1980.

I think the Lock/Knowles trade has to rank at or near the top for the franchise during the Senators era.