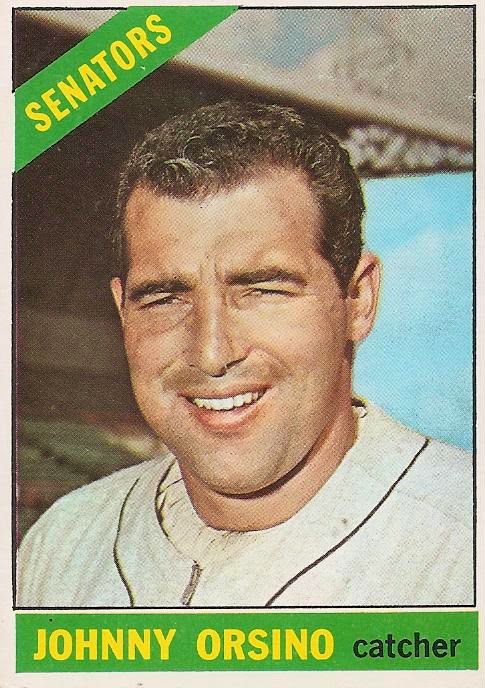 Johnny "Horse" Orsino appears in his Baltimore Orioles uniform on card 77 of the 1966 Topps set. The Senators obtained John from the O's in exchange for Woodie Held in an October 12, 1965 trade.

Although Topps lists Orsino as a catcher, he could also play first base. With most of Washington's catching being done by Paul Casanova and Doug Camilli, Johnny ended up as the third alternative. He caught just four innings in two appearances. Except for allowing one stolen base he was flawless. Orsino saw a little more time at first base. Over five games he played 31 innings and handled 27 chances without a misstep. Since John appeared in just one game for Double A York in 1966 it sure looks like he was spending a lot of time on the bench.

Johnny did some pinch-hitting in addition to his time in the field. He appeared in 14 games total for Washington and made 23 trips to the plate. The results were less than encouraging. Orsino's batting average tallied to .174 with his on-base percentage being identical. While he didn't walk he struck out seven times. A lonely double was his only extra base hit. John wasn't going to win more glove time with his bat.

Maybe it was the bench time or perhaps there was another factor but it was clear that Johnny Orsino was struggling. He had to bring his bat around if he wanted to carve out a spot for himself on the Washington roster in 1967.
Posted by Spiff at 11:32 AM

The back of Orsino's 1967 card says that he was on the disabled list for most of the 1966 season.

His DL stint must have extended into 1967 also, because that season he only played 1 game with the Senators (coming in September) and 16 games in the minors.