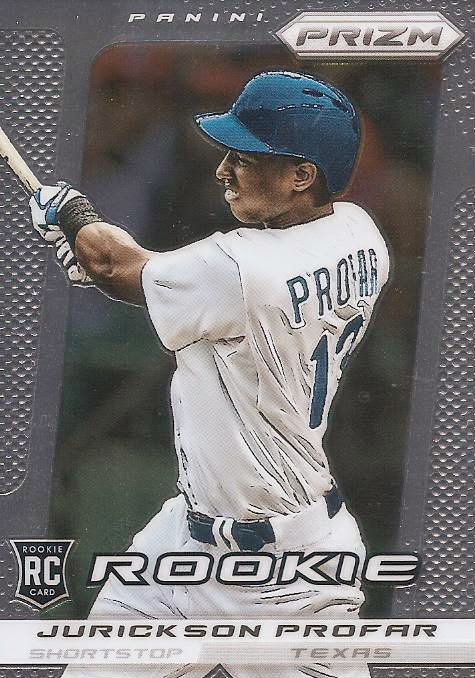 Over to second base in the 2014 Rangers season review.


The Rangers decided to do with Jurickson Profar at second base in 2014 what they did with Elvis Andrus at short stop in 2010. Profar, shown here on card 275 of the 2013 Prizm set, got a look at the end of the 2013 season and was named the starting second baseman for 2014 before Spring Training even started. The decision, even though not yet announced, freed up Ian Kinsler to be traded to Detroit.

Middle infield prospects Rougned Odor and Luis Sardinas got a look early in Spring Training but both got cut and sent to the minors for more seasoning. Then Profar came up injured shortly before the start of the season. He was supposed to be out for several weeks and the team started the year with a tandem of Donnie Murphy and Josh Wilson at second and backup middle infield. That tandem kind of worked until Murphy got hurt and Profar re-injured himself, ending any chance he might have to come back before the end of the season. Sardinas got the call in late April and Wilson went down shortly after with an injury. Odor came up in early May and Texas found their answer. Murphy was released in June and Wilson was assigned to the minors. Odor and Sardinas platooned for awhile but Odor eventually got the starting job nailed down. Sardinas got another stint in the minors for regular playing time when Adam Rosales was called up to handle the backup duties for Odor. Sardinas came back up when the rosters expanded and ended the season with the team. Guilder Rodriguez got a few innings in as a September call-up towards the end of the season.

Murphy's no longer with the team and won't be a factor in 2015. I doubt that Guilder Rodriguez will either. He was called up mainly because there was room and the club wanted to reward his long minor league service. Primarily a utility player, he put in 18 innings at second over two games without an error. His .167 batting average and being 30 years old will likely remove him from the equation.

As mentioned previously, Adam Rosales finished the 2014 season at first base. He'll probably get a shot at making the team in 2015 as a utility player.

In the time he was with the team, Josh Wilson played 19 games and 132.2 innings at second. He also played a smattering of games at shortstop and third base. Josh's play at second was flawless. He hit .239 with an on-base percentage of .271. Neither is very impressive and he had no power to go with it. Unless he can get something worked out with his bat I doubt he makes the team in 2015.

Rougned Odor was not supposed to see Major League action in 2014 outside a possible September call-up. Instead, the player Ron Washington referred to as “rough” in Spring Training became the everyday second baseman for the club. He hit some bumps in the road but made dramatic improvements almost daily. “Rougie” played 110 games and 933 innings at second and only one game anywhere else - DH. He ended the season with a .981 fielding percentage. That's about three points below the league average but acceptable for a 20 year old who started the season in the minors with the assignment of working on his defense. Odor hit .259 in 417 trips to the plate and put together a .297 on-base percentage. He needs to raise both those numbers but his .402 slugging percentage was nice to see. That came from his 14 doubles, seven triples, and nine home runs. The kid's got some power and his offense improved greatly throughout the season. As the youngest player in the majors, he's got some time to improve.

Luis Sardinas used his time in the Majors to show that Odor and Profar aren't the only prospects Texas has in the middle infield. Primarily used as a backup, he played 19 games and 141.1 innings at second base. He committed no errors there. Luis compiled a .261 batting average and .303 on-base percentage in his 125 plate appearances. Both are slightly better than Odor but Sardinas didn't display quite the power Odor did. His six doubles had to work alone to bring his slugging percentage up to .313. When the Rangers sent him back to the minors they were quick to state he was being sent back only for the increased playing time.

So, what about second base in 2015? Well, Rougned Odor put forward a convincing case in 2014 that he should be the Rangers starting second baseman in 2015. Luis Sardinas seems to have earned a look as well but he's facing an uphill battle at this point and may well be facing another season in the minors to get some seasoning. He's about ready though. If anything happens to Odor or Andrus, look for Sardinas to get some serious consideration. Profar? Well, things have certainly changed for him in one season. From one of the top prospects in baseball he's now in danger of being “Wally Pipped” as a friend of mine says. He's probably expendable at this point but his injuries have dimmed his trade value. The Rangers will have him in Spring Training but he's going to have to blow the doors off to unseat Odor. If he can't unseat Odor look for him to be used as a utility player or sent to the minors to rebuild his trade value.
Posted by Spiff at 11:01 AM