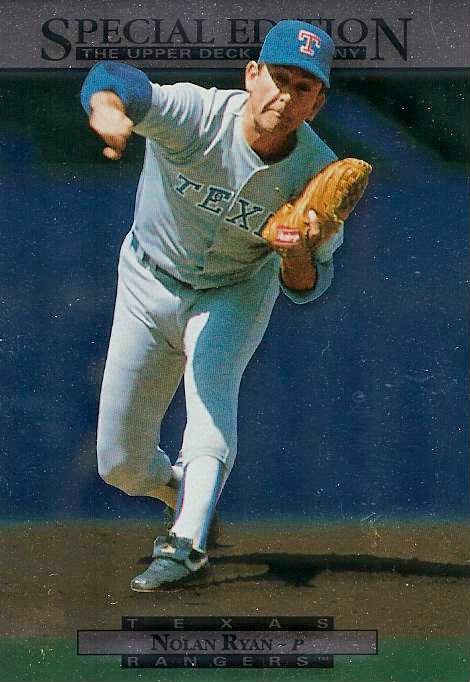 I was a little conflicted about this game. I have a brother who is an A's fan but a good friend lives and dies with the Royals. He's also got tickets to games three and four of the ALDS if the Royals get that far. Of course, I'm also a sucker for teams making a run who've had a hard time in recent years. The Royals match that description.

As I pondered who to pull for in the game, a package arrived on my porch from Mark the Royals fan. I hadn't made any recent trades with Mark or even sent him anything. Apparently he decided now was a good time to off-load some Rangers goodies on me. The package included a 300 piece Rangers jigsaw puzzle shaped like a pennant, a 1993 Sports Card Price Guide Monthly magazine with then Ranger Jose Canseco on the cover, and a small stack of Rangers cards including this 1995 Upper Deck Special Edition card of Nolan Ryan. Magazine, puzzle, and Rangers cards off my wantlists? All right! Go Royals!

By the eighth inning I was about to send my condolences to Mark. 7-3 A's. Then the comeback and extra innings. Another A's lead and another comeback in extras then the Royals walk-off in the 12th. Amazing game and an awesome start to the 2014 post-season. The Royals have served notice to the rest of the American League that they are not going to die easily. Hopefully they can keep the magic as they start their series with the Angels tomorrow. No bribery needed there - I'm all in for KC against the Halos.
Posted by Spiff at 12:34 PM