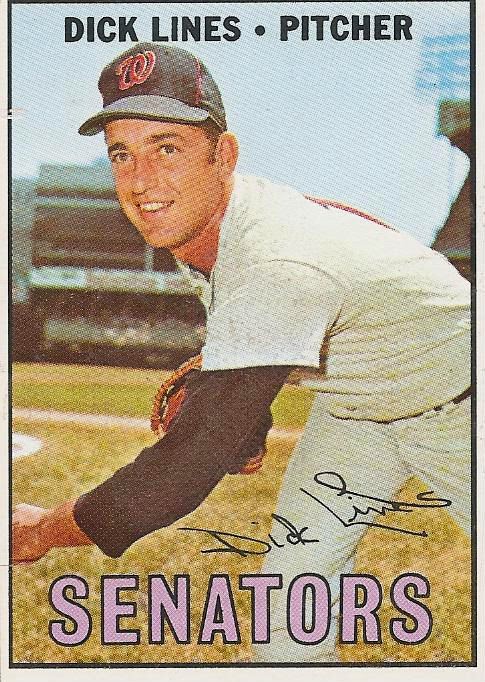 Canadian Richard George Lines appears on card 273 of the 1967 Topps set. Dick looks happy about something and he had reason to be when this photo was taken. In 1966 Lines broke into the Majors and led the Senators regulars with his 2.28 ERA. That's not too bad for a rookie season and earned him a shot in 1967 as well.

Solely a reliever for the second straight season in 1967, Lines appeared in 54 games for Washington. Over the 85.2 innings he pitched, Dick compiled a 3.36 ERA and an 1.249 WHIP. Both were significant jumps from the previous season. In 2.2 more innings worked, Lines managed to keep his walk total at 24 - identical to 1966. He raised his strikeout total by five to 54.

Lines had his work cut out for him if he wanted to remain in the Majors in 1968. He started off well in 1966 but the rise in his ERA and WHIP in 1967 was very concerning. The lefty wasn't suffering from extreme wildness, he hit nobody and uncorked just four wild pitches. He must have had some control issues that were keeping him from getting the ball where he did in 1966. Either that or he was still getting the ball there and the league was adjusting. Whatever the problem, Lines needed to get a handle on it if he wanted a shot at making the team in 1968.
Posted by Spiff at 10:53 AM