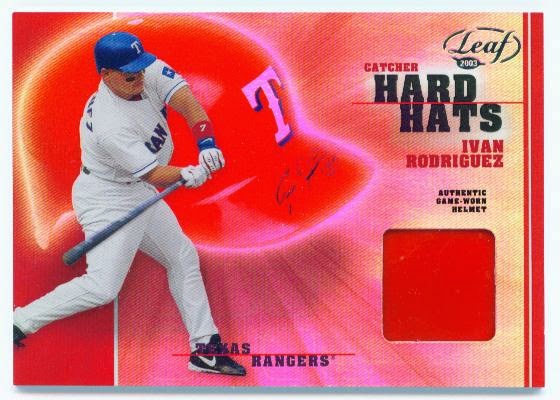 No playoff games yesterday or today thanks to sweeps and 3-1 wins in the Division Championship Series. The Royals, Orioles, Cardinals, and Giants waiting the kick-off of the ALCS tomorrow and the NLCS the day after.

Since I really don't have any game-used cards relating to the playoffs I decided to go with this 2003 Leaf Hard Hats card of Ivan Rodriguez. It's numbered 18/100. What's really interesting about it is that it has a bit of one of Pudge's batting helmets embedded in it. I don't think I've ever seen another card with a piece of a batting helmet in it. Makes it pretty unique in my opinion and one of my favorite game-used cards.

As far as favorites in the LCS, the NLCS is easy, Cards. I know a lot of Rangers fans hold 2011 against St Louis but I don't. The Rangers beat themselves in that series. Besides, the Cards were my backup team before that and still are. Mostly due to my grandfather being a Redbird fan before the Rangers moved to Texas and my Dad being a big fan of the 1960's St Louis teams. Besides, Brian Sabean, weed, Tim Lincecum, Buster Posey, and It Gets Better have overcome any soft spot Juan Marichal, Orlando Cepeda, Willie Mays, and Will Clark might have created for the Giants. Really hoping to see the Cards win it with a sweep.

The ALCS is a bit harder. Both the Orioles and the Royals have been out of the World Series for a long time. Both have compelling stories. The Orioles have been able to overcome the richest division in baseball and that's worth something. I rooted for the Royals in 1985 though, the first World Series I remember watching. Of course my Dad and Grandfather were pulling for the Cardinals. I was living in Kansas though and the excitement of the home team coupled with Jim Sundberg being on the team won out. Those memories have some sway and I really don't have that kind of connection with the O's. Sorry Baltimore, going to have to root for KC in this one.

However it turns out, the series both have the potential to be great. I would like to see a re-creation of the 1985 I-70 series but any match-up that doesn't include the Giants would work. Of course, if the Giants make it I'll have a clear favorite to win.
Posted by Spiff at 11:00 AM

I'm with you on the "anybody but the Giants" bandwagon. I'll be rooting for either of the AL teams.