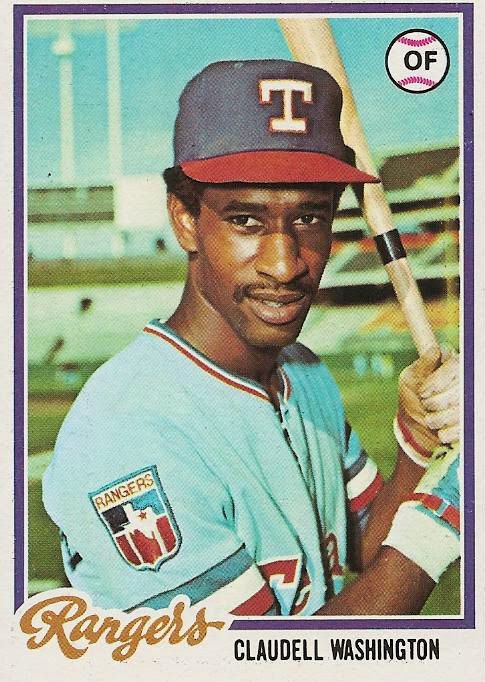 Claudell Washington, shown here on card 67 of the 1978 Topps set, came to Texas in March of 1977 as part of the trade that sent Jim Umbarger to Oakland. In spite of missing time with a sprained wrist, Washington was a part of the speed that helped Texas contend in 1977.

Coming into 1978 Claudell was hoping to hold on to his starting job in left field. The Rangers were in flux though and the arrival of Al Oliver ended those hopes.

Washington played in a total of 12 games for the Rangers in 1978. Six in right field, four as the designated hitter, and one in left. The remaining game was either a pinch-hitting or pinch-running appearance. Claudell did not stand out on defense at either of the corner outfield positions he manned.

Claudell made 43 trips to the plate and struggled to a .167 batting average as he struck out 12 times with no extra base hits. He managed only one walk, leaving his on-base percentage at a dismal .186. He also got caught stealing in his only attempt.

Claudell Washington was struggling to start the 1978 season. His defense was below average and his offense was terrible. Speed has no use if you can't get on base. The Rangers decided a change was in order. On May 16, 1978 Texas sent Washington and Rusty Torres to the Chicago White Sox in exchange for outfielder Bobby Bonds.
Posted by Spiff at 9:54 AM