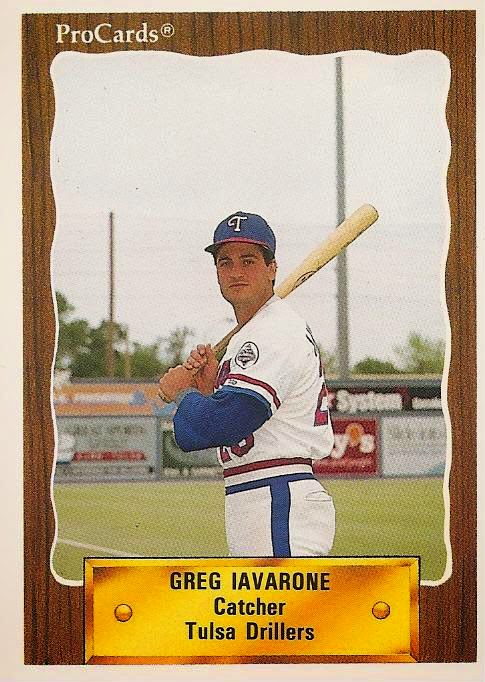 Gregory Iavarone has to have the best middle name ever for a catcher, Speedy. As far as I can tell, that's his real middle name. Can't make this stuff up.

The Rangers signed Iavarone, shown on card 1159 of the 1990 ProCards Tulsa Drillers set, as a free agent in January of 1990. Like the rest of his career, the signing is something of a puzzle. I cannot figure out what the Rangers purpose was in signing him.

Greg was drafted by the New York Yankees in 1984 and did not sign. They drafted him again the next year and he signed. In 1985 and 1986 he played in the Yankees farm system. I suspect an injury because he only played in two games in 1986. Apparently the Yankees let him go because he played in the Cubs farm system in 1987, climbing to Double A. Then he's gone. Two seasons, 1988 and 1989, out of professional baseball. He resurfaces when the Rangers sign him at the age of 24.

Texas put Iavarone back at Double A for the 1990 season. He served as a back-up to Bill Haselman and appeared in 32 games. Greg caught in all 32 games he played and saw 172 chances behind the plate. He committed five errors for a fielding percentage of .971. He also allowed seven passed balls.

Greg got 106 trips to the plate for the Drillers in 1990. He posted a .267 batting average and a .365 on-base percentage. His only extra-base hits were his five doubles. He did steal two bases without being caught but that does not seem to encourage calling him by his middle name.

The Rangers left Iavarone at Double A for the 1991 season. He would again function as a backup before hanging up the spikes for the final time at the end of that season.
Posted by Spiff at 11:03 AM