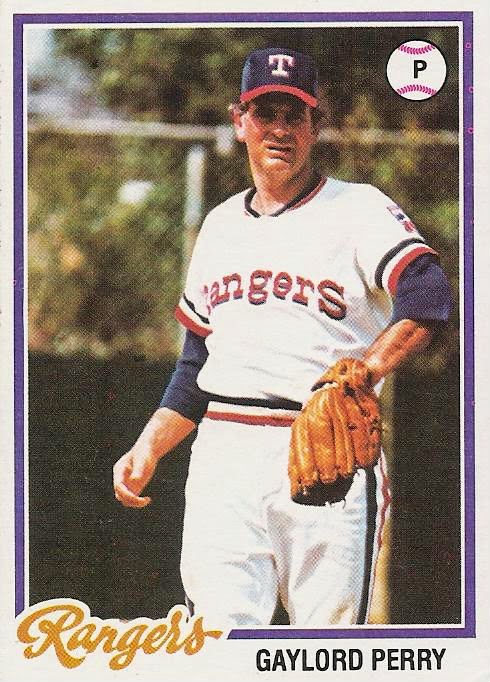 By the time Gaylord Perry appeared on card 686 of the 1978 Topps set, he was no longer a Texas Ranger.

Apparently concerned over Perry's age, the Rangers traded him to the San Diego Padres on January 25, 1978. In return Texas got Dave Tomlin and $125,000. On March 28, 1978 the Rangers sold Tomlin's contract to the Cincinnati Reds. All Texas had to show for Perry's departure was the loss of a future Hall-of-Famer and some cash in the bank. The Padres got a Cy Young winner in 1978 and an all-star in 1979.

Gaylord went on to pitch for six more seasons before he retired and began his wait for Cooperstown to call. He wasn't done in Arlington though. On February 15, 1980 the Rangers traded first baseman Willie Montanez to the Padres for Joe Carroll, Tucker Ashford, and Gaylord Perry.

Perry's second stint in Texas would prove to be a bit rougher than his first. He pitched in 24 games and tossed 155 innings. The same old durable Gaylord. He was serviceable on the mound but not the ace he had been. His ERA tallied to 3.43 and his WHIP to 1.323. He did strike out 107 opposing batsmen while issuing just 46 free passes. He ended up with a 6-9 record for a struggling team.

On August 14, 1980 the Rangers traded Gaylord Perry to the New York Yankees for Ken Clay and Marv Thompson. Neither made any waves in Texas. Seemed the Rangers just couldn't get anything in return for Perry when they put him on the trade block.
Posted by Spiff at 11:06 AM