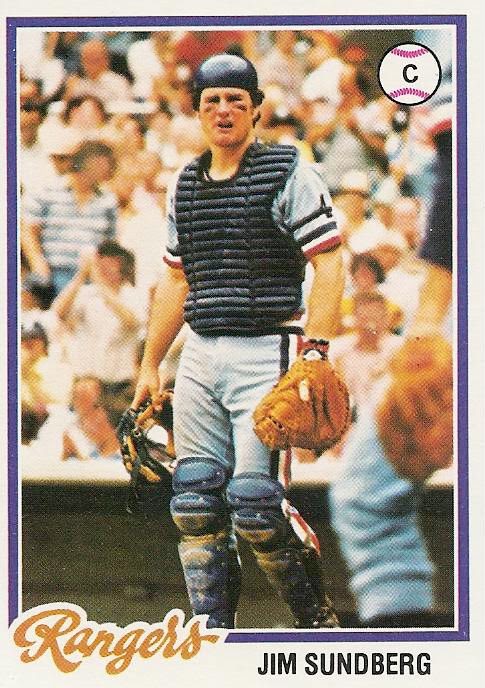 Card 492 of the 1978 Topps set is one of my favorite Jim Sundberg cards. Sunny is one of those players best shown on defense. Love the old-school catcher's gear and the look he is giving the pitcher. Maybe it's not the pitcher, maybe he just threw out a runner at third.

1977 was Sundberg's finest offensive year. It wasn't too shabby on defense either as he won his second straight Gold Glove. He was looking for an encore in 1978.

Sunny saw a slight drop-off offensively in 1978. In 592 plate appearances he posted a .278 batting average and a .358 on-base percentage. He struck out 70 times (seven less than the previous season) and worked 64 walks (nine more than in 1977). He also hit 23 doubles, six triples, and six home runs. Amazingly enough, he led the team in triples. Not too shabby for a backstop.

Sunny's defensive star continued to shine. He played in 149 games for Texas, 148 of them at catcher. That made him second in the league for games played behind the plate. Over the course of 1294.2 innings Jim committed just three errors. That gave him a league-leading .997 fielding percentage. Well above the league average .983. He also led the league in putouts (769), assists (91), double plays turned as catcher (14), and caught stealing (70). Those runners he caught gave him a 48.3% caught stealing rate - second in the league. While his caught stealing percentage had dipped, teams would still be well served to be cautious trying to steal in Texas.

In recognition of Sundberg's defensive dominance, he won his third straight Gold Glove. He also made a second trip to the All-Star Game and got some MVP consideration as well.

Obviously Jim Sundberg had the Rangers starting catcher's job well in hand. If he could up his offense it would be nice. However, unless the bottom really fell out of his bat, he probably wouldn't lose his job. The Rangers had areas of weakness in 1978. Catcher wasn't one of them.
Posted by Spiff at 5:48 PM