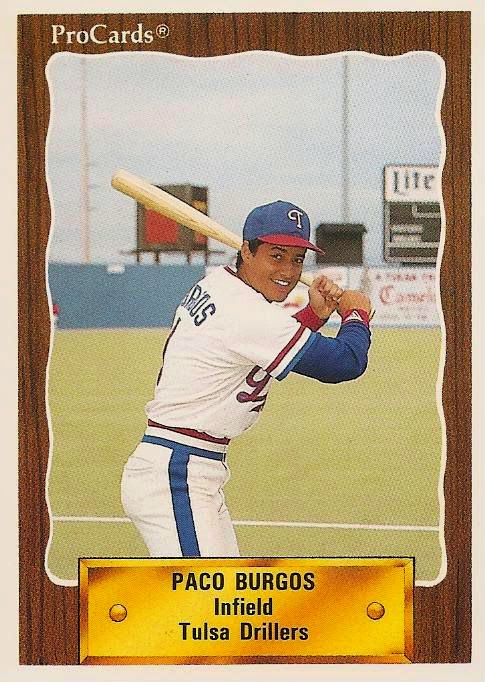 The Rangers signed Franciso Enrique Burgos as an amateur free agent on October 27, 1984. Burgos, seen here on car 1160 of the 1990 ProCards Tulsa Drillers set, started his pro career the next season with the Rookie ball Gulf Coast Rangers.

In 1986 Paco played for the Single A Daytona Beach Admirals. For some reason he spent 1978 with the unaffiliated single A San Jose Bees. 1988 found him back in the Rangers system but still at single A with the Gastonia Rangers. He moved to the Port Charlotte Rangers midway through the 1988 season and stayed with them for the 1989 campaign as well.

Burgos finally broke out of Single A in 1990 and found himself playing for the Tulsa Drillers in double A. He played second base in 35 games but managed to appear in 83 games at third as he nailed down the starting position there. He posted a .944 fielding percentage at third in 1990.

Paco made 503 trips to the plate for the Drillers in 1990. He put together a .257 batting average and a .284 on-base percentage. He demonstrated some power with five home runs, seven triples, and 17 doubles. Unfortunately he also struck out 48 times while working just 18 times.

Burgos got the word during the off-season. He would stay at Double A Tulsa to begin the 1991 season. If he wanted to move up he was going to have to step up his game. If he wanted to make it to Arlington he would really need to get going. Steve Buechele was still manning third for Texas while Dean Palmer and Scott Coolbaugh prepared to attempt to unseat him. Those were a lot of hurdles for Francisco Burgos to jump on his way to Arlington Stadium.
Posted by Spiff at 10:03 AM