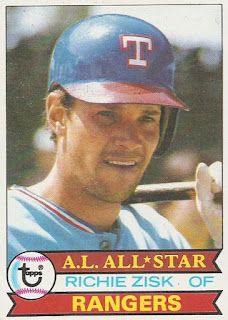 As shown on the front of 1978 Topps card 260, Richie Zisk was coming off an All-Star 1978 season as the club reported for Spring Training in 1979. Zisk won the 1978 season opener for Texas with a home run in the ninth inning to beat the Yankees. He ended up missing three weeks with a sprained wrist but still put up good enough numbers to get the All-Star nod. Texas was hoping for more of the same, without the injury, in 1979.

The season started off on a sour note for Zisk as he came down with strep throat after the club played a damp, cold season opener in Detroit. That benched Richie for five games before he hit a game-winning pinch-hit home run. In spite of that, Zisk's season started off slowly and it took time for him to get his bat going.

Over the 144 games Richie appeared in for Texas in 1979, he made 563 plate appearances. He posted a .262 batting average and a .336 on-base percentage. Those were almost identical to the previous season. Known as a slugger, it is not surprising Zisk led the team in strikeouts with 75. However, he also led the club in walks with 57. He knocked 21 doubles, one triple, and 18 home runs (part of a three-way tie for team best) en route to scoring 69 runs and bumping in 64 RBI.

The team's primary right fielder, Richie played in 127 games in right. He committed just five errors over the course of 1020.1 for a fielding percentage of .978. That was just a hair below the .980 league average. Zisk also covered left field for 116 innings over 15 games. He had less success there, tallying a .913 fielding percentage due to his two errors. That was much lower than the average left fielder's .980 fielding percentage. Richie also appeared in three games as the Rangers designated hitter.

On the surface, Richie Zisk almost managed to duplicate his 1978 season in 1979. He didn't get selected to the All-Star team though and there were a couple of worrisome signs. The most concerning was Zisk's home run totals. They were down by four from the previous season and, for the first time since 1974, below 20. Was it a stumble or was the 30-year-old starting a power decline? The Rangers held on to Richie for the 1980 season but would be keeping their eye on his offense.
Posted by Spiff at 11:32 AM