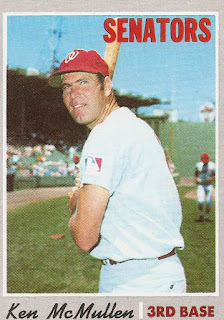 Ken McMullen, shown here on card 420 of the 1970 Topps set, had anchored the Senators at third base since he arrived in the Frank Howard/Claude Osteen trade during the winter of 1964-1965. Well known for his golden glove, Ken's bat had been steadily declining over the past few seasons leading into 1970. The Senators really needed for him to get it going again.

In the first 15 games of 1970, McMullen continued to demonstrate his excellence in the field. He played all 15 games at third and committed just two errors over 143 innings. His .971 fielding percentage was head and shoulders above the league average .949.

The problem was Ken's bat. Once an integral part of the Washington attack, it just didn't have the same sting anymore. In 64 plate appearances McMullen posted a .203 batting average and a .266 on-base fielding percentage. He struck out ten times while working five walks. If Ken's bat still had power, those numbers might have been tolerable. It didn't though. He hit just two doubles and no other extra base hits.

The Senators had a problem. Ken McMullen's offensive skills appeared to have suddenly declined and opened a gaping hole in the already weak Washington lineup. The front office decided to move him while his glove still had value and the early stage of the season didn't rule out a turn around. On April 27, 1970 Ken McMullen was shipped off to the California Angels in exchange for Rick Reichardt and young Aurelio Rodriguez. The Senators hoped to use Rodriguez to replace McMullen at third. Reichardt could play all three outfield positions and looked to be a decent backup. After six full seasons, the longest serving Senators third baseman was no longer with the club.
Posted by Spiff at 8:44 PM