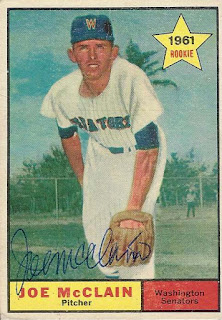 With the Rangers season over it's now time to follow the other clubs through the playoffs and look forward to the 2016 season. Already the winter moves have started for several teams. The Nats have fired manager Matt Williams and his coaching staff while Don Mattingly and the Dodgers have parted ways. The off-season is also a great time to send out autograph requests for retired players.

In the playoffs it's now down to the Royals, Blue Jays, and Cubs. Hopefully the Royals will finish off the Jays tomorrow and set the slate for the World Series.

On the Rangers front, Colby Lewis and Adrian Beltre have already had surgery. Lewis on his knee and Beltre on his thumb. Both should be ready for Spring Training. Beltre is still under contract but Lewis is a free agent. Texas is interested in bringing him back but it's not a sure thing.

As far as sending out cards for autographs, this 1961 Topps card of Senators pitcher Joe McClain was among my latest success stories. I recently sent out several cards to the former Senators players and have been very pleasantly surprised by the response. I sent this card and a 1962 Topps card to Mr. McClain on August 25th of this year. He graciously signed both and I got them back on October 19th. Very awesome to get the older players to sign. Thanks to Mr. McClain for his time.
Posted by Spiff at 10:21 AM