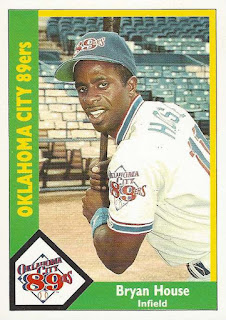 Sorry about the lack of posts over the past few days. Guess I had post-season hang over. Anyway, on to Minor League Monday.

Bryan House, shown here on card 164 of the 1990 CMC set, had six seasons of minor league experience under his belt by the time he arrived in Oklahoma City. All six were in the Chicago Cubs system. I'm not sure of the why and how in the move from the Cubs to the Rangers system.

The front of the card says infield, but House played only at second base for the 89ers. Over 118 games he saw 615 chances and committed 18 errors. That gave him an unsightly .971 fielding percentage.

Over all, Bryan appeared in 126 games and made 558 plate appearances for OKC. He put up a .277 batting average and a .329 on-base percentage. House was a top of the order speed merchant type of player. He hit 26 doubles, eight triples, and no home runs. He scored 79 runs while knocking in just 36 RBI. He also stole 30 bases but did get caught 13 times as well. More disturbing were Bryan's 70 strikeouts and only 37 walks.

On the surface, Bryan House had a decent 1990 season. There were issues though. His glove work was pretty far below par and he had a troubling tendency to strikeout and get caught stealing. All three of those problems were visible at Triple A and would be magnified under the lights of a Major League stadium. The Rangers had several other options in the middle infield and there would be no call to send send House down I-35 to Arlington. 1990 wouldn't be his year. It would be the only season he spent in the Rangers system and the last he spent as a player in pro ball.
Posted by Spiff at 11:38 AM