Rangers done and out. 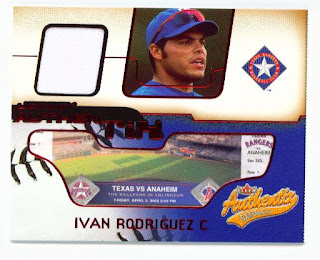 Well, the Rangers post season run is over after their League Division Series game five loss to the Blue Jays last night.

I really didn't expect Texas to win the series but the two wins to start things off gave me a sense that there was a possibility they could do it. Then came two losses at home and the final loss in Toronto. That was a sudden stop and the way the team gave away game five with four unearned Toronto runs just added to the pain.

It's done though and there's no point in saying it should have turned out different. The team is still fairly young and, if everyone stays healthy, they look to have a good group next season. This season wasn't supposed to be a contending season and just the appearance in the LDS was a bonus. That thought and this 2002 Fleer Authentix game used card of Ivan Rodriguez should help cheer Rangers fans up. I don't know about you, but I'm still in. No renouncing the team as a co-worker of mine did. I have 32 years of following the club and can't see taking up another team. With that many next years in the past, one more isn't going to kill me.
Posted by Spiff at 10:48 AM

It was a great season for the Rangers. I'm sure it hurts to lose that way, but like you said the team was playing with house money. Future looking much brighter now. Just think that Darvish and Hamels will be together next year!