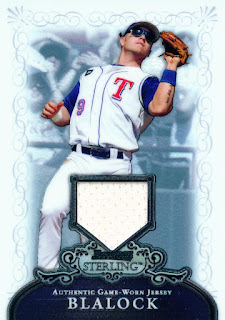 Sorry about the lack of posts this past week. Had some things come up that needed to be taken care of and that created a time squeeze. Back to business now though and keeping up with the World Series and the Rangers off season. Here's a random Rangers game-used card of Hank Blalock from the 2006 Bowman Sterling set for today.

After a truly epic Game 1 win and a blow-out last night, the Kansas City Royals are up 2-0 as the series heads to New York for Game 3 tomorrow. The Mets have got some ball to play if they want to get back into things. They've shown in the past they can though so the Royals better not let up.

Meanwhile in Texas, the Rangers off-season continues. The club is saying Adrian Beltre's thumb surgery went well and he should be ready for Spring Training. That's extremely good news. The Rangers also activated the still rehabbing Jurickson Profar and sent him to Arizona to play Fall Ball. He's apparently doing well. Prince Fielder was named the Sporting News Comeback Player of the Year for his 2015 campaign. Glad he won that, he worked hard to get back from his neck surgery.

On the other side of the ledger, the team assigned catcher Carlos Corporan to Triple A. He declined the assignment and is now a free agent. That reduces the team's depth behind the plate and leaves Robinson Chirinos as the clear front-runner for the starting job. It appears unlikely the club will pick anyone up via free agency since front line catching is at a premium in the Majors right now.
Posted by Spiff at 11:53 AM